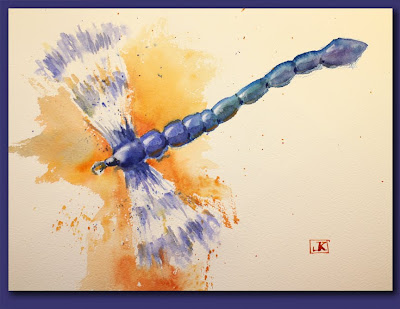 Drawing Flies 52_27 Damselfly
Original status: SOLD
Swing by Jason's blog to check out his rendition of the of the Damselfly!
Tech Info- Watercolor on 140 lbs Arches watercolor paper.
We tied this pattern during one of our regular Monday night club meetings. John M. from our club demonstrated this pattern and swears by it's effectiveness. John spends time every year chasing smallmouth in Sylvania and has great luck with this pattern.

I rendered this pattern from the top because I liked the shape of the foam tail and the great flash and marker patterned wings.
Posted by Jeff (trout bum) at 10:03 PM 1 comment: 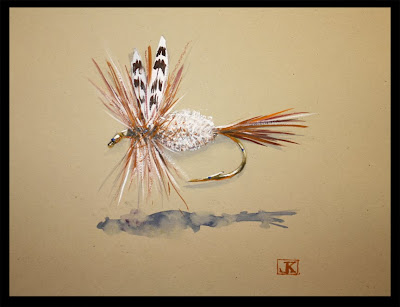 Drawing Flies 52_26 Irresistible
Original status: email me for information..
Swing by Jason's blog to check out his rendition of the of the Irresistible!
Tech Info- Oatmeal sketchbook paper, watercolor and gouache. Pretty straight forward on this one. Quick sketch with some pencil, under painting with gouache to get the general values, then came in with the highlights.
My day job has been keeping me extremely busy these past few weeks and I have not had enough time behind the brush or the pen. Feeling a bit rusty and awkward with this rendition. After looking at it again after scanning it, I do not like the rounded bottom side of the deer hair body, I should have clipped this and made it flat. This would have made been a better looking shape.
My fly box contains a half dozen or so irresistibles. It is one of those patterns that has bits and pieces of other great patterns combined into one fly. The deer hair makes it float like a cork in rougher water and works for droppers. The front half has the classic Adams or catskill dry look to it. There are so many buggy features to this fly that i do not think the fish can resist. Hence the name irresistible!
Posted by Jeff (trout bum) at 9:44 PM 1 comment: 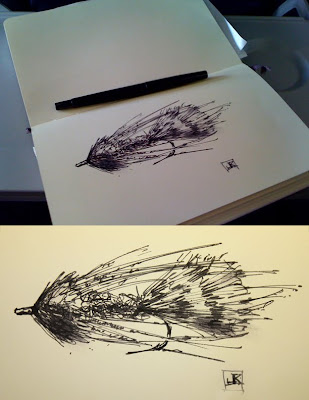 Drawing Flies 52_25 27000 ft Gartside Sparrow
Original status: email me for information..
Swing by Jason's blog to check out his rendition of the of the Gartside Sparrow!
Tech Info- Black Flair pen on Moleskine sketchbook with a bit of saliva.
I have had a busy and hectic week. The day job has been keeping me going from early in the morning to late at night. So busy that this weeks fly was done on the fly at 27,000 feet. That has to be one of the highest flying sparrows I have ever seen! Alright, now you are probably wondering what 27,000 feet, sparrows and saliva have to do with this fly. The fly was drawn today on my return flight from St. Louis. As I had my tray table down and I was sketching away, the pilot announced that we were at our cruising altitude of 27,000 feet. And a bit of spit was used to soften and smudge the ink in a few areas to give a softer impression in the tail and collar of the fly. So there you have it, a 27000 ft Gartside Sparrow.
The top photo was shot from my iphone after I finished it up. I used a whopping 4 minutes to create this fly. I had 56 minutes left to rest and listen to some music the rest of the ride home.
Posted by Jeff (trout bum) at 9:07 PM 3 comments: 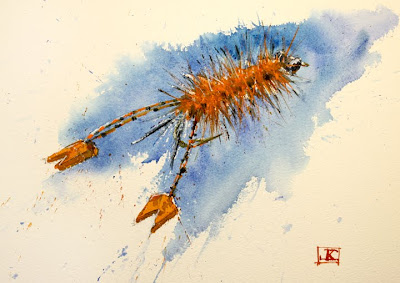 Drawing Flies 52_24 Crazy Claw Crawfish
Original status: email me for information..
Swing by Jason's blog to check out his rendition of the of the Crawfish!
Tech Info- Watercolor and gouache. Pretty straightforward process, a few quick pencil lines for proportion, a very loose blue background wash, then coming in with the details. I layered the image so that I could get my lights and darks to read.
I had a hard time deciding which fly to do for this week. I had the opportunity Saturday evening to run down to the Fox River to try my hand at swinging a fly for the first time this year. I landed a nice 16" smallie on my third cast. As I was removing the fly from his mouth, I happened to look down his throat. He had recently eaten a small crayfish, and I could see its claws, antenna and eyes in the back of its throat. My decision was made as to which fly to paint next.
The next decision was which pattern to paint. I have a number of crayfish patterns in my smallmouth box, but none spoke to me as good subjects. I remember my buddy Corey had a great rabbit strip version that I thought might work. I was over at his place watching game 6 of the Stanley Cup (Hawks Win!), and I asked him if he had any of those patterns laying around. He did not, but he did produce tise crazy claw version he had caught fish on. So it was decided, this crazy claw crayfish would be this weeks pattern to paint!
Posted by Jeff (trout bum) at 9:11 PM No comments: 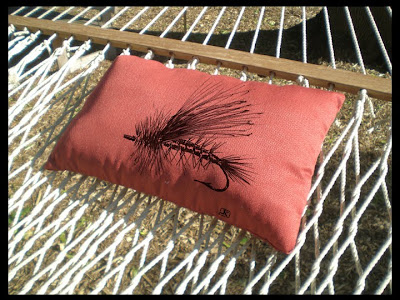 Drawing Flies 52_23 Sofa Pillow
Original status: Original not available.
Swing by Jason's blog to check out his rendition of the of the Sofa Pillow!
Tech Info- Sharpie and brush pen on sofa pillow.
I grabbed my Sharpie and brush pen and went to work on my rendition of the sofa pillow on a sofa pillow. Well, it is actually my hammock pillow. Boy was my wife mad when she found out what I did!
The story described above is a complete fabrication. I sketched the fly on bond paper, scanned it and created a digital composite with an actual picture of my hammock pillow in my hammock. No actual sofa pillows were harmed it the making of this image! Nor is my wife mad at me.
The sofa pillow is one fly I fish frequently when I am using a dropper. It it very visible and rides high even in rough water. The Sofa Pillow and it's cousin, the stimulator are great mid to late summer flies in the Midwest when hoppers abound.
Posted by Jeff (trout bum) at 7:36 PM 1 comment: 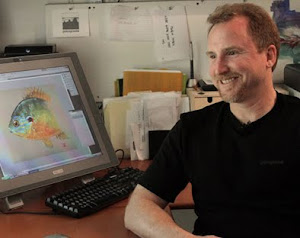 For Email Marketing you can trust

follow me on Twitter
All images © Copyright Jeff Kennedy. All Rights Reserved. Images cannot be used without the permission of Jeff Kennedy. If you are interested in using an image, send Jeff and email.

Magazine interview with Sportski Ribolov can be viewed here.

Drawing Flies 365 made it on Trout Underground. Check it out here.

I initiated the creation of this blog as a challenge. The challenge is to draw a fly a day for an entire year. Part of the challenge is the discipline to accomplish this every day and the other is to expand my creativity and to help find my artistic voice. The sky is the limit on how the flies will be created. You may have wondered, "why is he drawing flies?" My other hobby is fly fishing and fly tying. I also welcome the challenge of drawing the natural materials that are used in the flies. So hang on and enjoy the ride for the next 365 days!

I need your help! Please email me your suggestions for flies to draw. Every month, the names of those who suggested a fly and I created drawings from their suggestions, will be placed in a monthly drawing. The winner of the drawing will receive a personally sign print of their choice from the flies drawn that month.